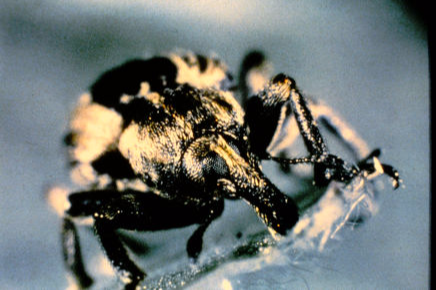 The boll weevil is a common name for a destructive beetle that infests cotton plants. The adult insect has a long snout, is grayish in color, and usually less than 6mm (less than 0.24 inches) long. It feeds only on the cotton plant. Beginning in early spring, it punctures the buds and bolls and lays eggs in them. The eggs hatch into larvae in three to five days. The life cycle of the boll weevil from egg to egg-laying adult is about three weeks; and four to five generations may breed in one season.

The larvae, a fat white maggot, does most of the damage. It lives on the internal tissues of the buds and bolls. An infested bud usually drops, but most of the damaged bolls remain on the plant and become stunted or dwarfed. Adult weevils that emerge in the autumn hibernate in grass, old bolls or other vegetation, or in the seed around cotton gins. They reappear in spring.

The insect was first known in Central America and the West Indies. In 1863, it ravaged and stopped the cultivation of cotton in Mexico. Around 1892, it spread across the Rio Grande to Brownsville, Texas. From this focal point, it moved outward at a rate of about 113 km (70 miles) a year. It was found in nearly every part of the cotton growing district of the United States east of the Rock Mountains. The boll weevil belongs to the family Curculiondae of the order Coleoptera. It is classified as Anthonomus grandis.

In Arizona, sporadic infestations were recorded with the largest occurring in 1964. These outbreaks, however, did not persist from one year to the next until 1978. At that time, a ban on the growing of stub cotton in Arizona was lifted and approximately 40,000 acres of stub were grown in the central part of the state. Coincidently, boll weevils were discovered near Gila Bend.

By 1982, the weevil population had expanded to the point where more than 44,000 acres of Arizona cotton had to be treated one or more times for the pest. In October of 1982, California trapped its first boll weevil in the Bard Valley adjacent to the Colorado River and Yuma, Arizona. By 1983, an eradication program had been initiated in the southern desert cotton growing area of California. Shortly thereafter, California regulatory officials threatened to quarantine movement of Arizona cotton and other agricultural commodities if Arizona did not actively pursue the eradication of boll weevil.

In 1984, the Arizona Cotton Research & Protection Council was formed to provide an organizational structure and funding mechanism to address boll weevil eradication in Arizona.

By 1985, the Southwest Boll Weevil Eradication Program was established to provide an organization for joint eradication of boll weevil from southern California, western Arizona and northwest Mexico. Participants included the Arizona Cotton Research & Protection Council, the USDA-APHIS, the (then) Arizona Commission of Agriculture and Horticulture, the California Department of Food and Agriculture, and Sanidad Vegetal, Mexico. The Arizona program included cotton in Yuma, LaPaz and Mohave counties with a buffer zone extending eastward to Painted Rock Dam in Maricopa county.

By 1987, the Colorado River program had proven highly successful, but weevil pressure remained high in the Arizona Buffer Zone due to expanding populations in Central Arizona.

As a result, in 1988, the Southwest Boll Weevil Program was expanded to include 420,000 acres of cotton in Central Arizona and 5,000 acres in Mexico south of Gila Bend. Extensive program activities were carried out from 1988 - 1990.

By 1991, no reproducing populations of boll weevil could be detected in Arizona. Treatments on seventy-seven weevils trapped were based on migrating populations. Successful USDA programs in Sonoita and Caborca, Mexico had progressively reduced weevil pressure in Arizona.

The following table depicts the steady decline in both weevils captured and acres treated following initiation of the expanded eradication program in Central Arizona in 1988.

The single weevil trapped in 1996 was followed by placement of an intensified trap array on a one-mile radius surrounding the capture. No additional weevils were trapped. Because the capture was equidistant between Interstate 10 and a major railroad line, it was concluded that the find was a hitchhiking weevil.

A monitoring protocol was established by the Boll Weevil Technical Advisory Panel in the fall of 1991. This protocol called for weighted monitoring activities with greater emphasis placed in areas nearest points of natural spread or introduction, namely:

100+ miles north of Mexico border, 4 traps per section of cotton

Traps are monitored bi-weekly throughout the season (eight months from mid-March through mid-November).

Remote trap lines have also been maintained along selected North-South and East-West roadways to monitor potential migration of weevils from neighboring infested areas. The United States cotton industry is moving ever closer to beltwide boll weevil eradication. The monetary investment in the program to date stands at one billion dollars. The ultimate goal of a sustainable eradication effort without the maintenance of extensive, and therefore very costly, buffer zones is fully dependent on an equally successful program throughout Mexico. Anecdotes of weevil captures in the Southeast being related to migrant workers and vehicular movement through Texas accentuate the potential for re-infestations at any time. Total eradication in the U.S. and Mexico would all but eliminate these possibilities.

Made with Mobirise - Go here